Bharatiya Janata Party (BJP) Website Hacked. BJP is the Hindu nationalist party led by Shri Atal Vajpayee. Quite recently their official website was hacked by Anonymous. It is mentioned in the hacked website that it is done by Anonymous Ops India, a Nation-wide, Non-Violent, Civil-Disobedience and Non-Cooperation Movement.

Established in 1980, it is India’s second largest political party in terms of representation in the parliament and in the various state assemblies. The Bharatiya Janata Party advocates Hindu nationalism and conservative social policies, self-reliance, free market capitalistic policy, foreign policy driven by a nationalist agenda, and strong national defense. (via Wikipedia) 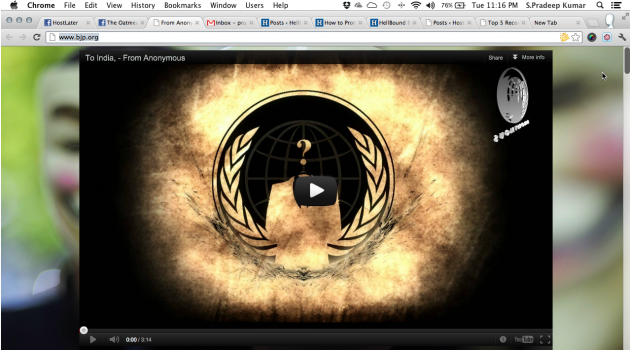 They have also embedded this old video on their site:

INDIA this is what happens when you keep quiet when you choose not to act where you should and expect some one else to do your work for you.

Also they have mentioned some interesting facts on the hacked BJP website:

DO YOU KNOW: You are paying 200% TAX on your fuel, [GAS,Petrol,Diesel] actual Selling price after profit is just below 37Rs.
The 60%+ of average indian’s income is taken away in form of different TAXs.