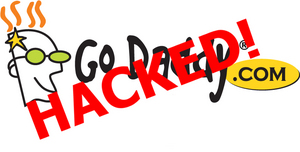 A member of Anonymous known as AnonymousOwn3r is claiming responsibility for this GoDaddy attack. Though it is hard to believe it was a GoDaddy Anonymous Attack, but they sure have the capabilities to do such an attack. They said they want to test whether the cyber security is safe and for other secret reasons.

According to some of my friends, sites hosted by major web host and domain registrar GoDaddy are down and some are getting restored partially. GoDaddy is aware about this situation and things are healing slowly.

According to TechCrunch.com, a tipster told them the technical reason for the failure could be caused by the inaccessibility of GoDaddy’s DNS servers, thus failing to resolve. They are:

Status Alert: Hey, all. We're aware of the trouble people are having with our site. We're working on it.

UPDATE: HOW GODADDY WAS HACKED?

These are the methods claimed by the hacker, and we are not sure about this since GoDaddy didn’t really reveal the cause. The hacker revealed the method on his Twitter profile,

I am using thousand of Hacked server as bots to perform the attack. Sending dos attack commands using IRC  to all of them together. I just upload IRC connect on each server to control my every slave by commands.

He also used DDOS IRC Bot script. He randomly hacked hundreds of servers, and uploaded the script. Now using IRC he made them to do a huge DDOS attack.